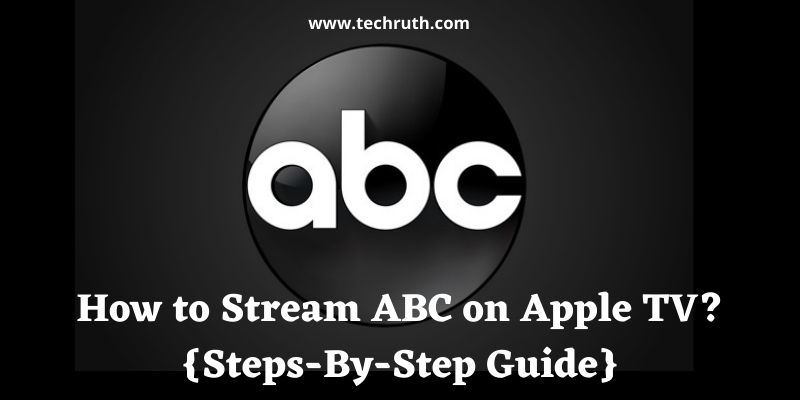 We are facing you with a new topic which is “How to stream ABC on Apple TV”. If you were looking for this solution and you haven’t found your solution yet. So, tell you that you have come to the right place

ABC is the greatest app for watching ABC episodes, movies, and news online. You may obtain on-demand episodes of your favorite shows through the ABC app, or you can watch ABC live without cable.

With the ABC app, you can obtain the most recent and complete episodes of your favorite ABC shows, as well as view, live TV. You can create a free ABC account to stream media material from anywhere at any time.

If you want to watch ABC on your Apple TV, you can get it via the App Store with ease. Streaming anything on Apple TV is the best streaming experience we’ve ever had.

Big Sky, 20/20, Call Your Mother, General Hospital, American Housewife, The Good Doctor, and many other shows are accessible on ABC.

You can complete this process through the steps given below. Follow the given steps carefully:-

On your Apple TV, go to the App Store.

Look for the ABC app in the App Store.

Select the ABC app icon from the drop-down menu.

After that, select Get to download the ABC app to your Apple TV.

From the App Store, open the ABC app.

On the screen of your Apple TV, you will now see an activation code.

Read:- How To Watch ESPN On Apple TV?

Join the same Wi-Fi network as your iPhone and Apple TV.

From the App Store, download and install the ABC app.

After that, choose your Apple TV device.

The screen of your iPhone will be reflected on your Apple TV.

Then, open the ABC app and start watching your favorite ABC shows.

Hulu offers live streaming in addition to its on-demand offering. They provide ABC, as well as other local networks and cable TV channels. According to our information, live ABC is available throughout the United States.

The number of areas where FuboTV streams the live local ABC network has rapidly expanded. FuboTV currently broadcasts ABC in 184 of the 210 TV areas in the United States. In 97 percent of U.S. households, however, fuboTV covers the larger TV markets and broadcasts live ABC.

Read:- How To Get Zoom On Your Apple TV?

In several markets, DIRECTV Stream offers live ABC streaming. ABC can be found on all DIRECTV Stream tiers. The “Entertainment” bundle, which includes a tonne of cable TV and other broadcast networks, is the most affordable at $69.99 per month.

Read:- How To Watch HBO Max On Apple TV?

Q:- Is it possible to watch ABC programming on Apple TV?

Ans:- Because ABC shows are available in the App Store, you can view them whenever you want.

Q:- Is ABC News available for free on Apple TV?

Read:- How to Install Xfinity Stream on Apple TV?

You will be able to complete this process by following the instructions mentioned above. Hope you like the given information and it will be useful for you.

Above we have also mentioned the alternate method, but if you have any problem in completing this process, then you can share your problem by commenting in our comment section. We assure you that we will provide the solution as soon as possible.

How To Activate HBO Go on Apple Smart TV?