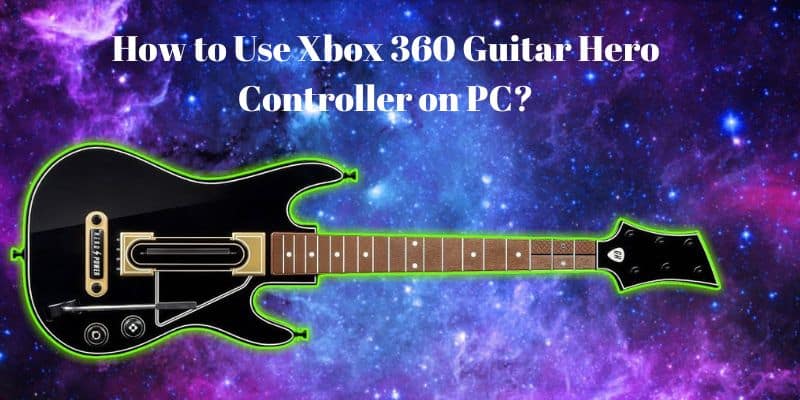 If you want to know about the process of how to use Xbox 360 Guitar hero controller on PC completely, then stay with us in this blog. Let’s started with this blog.

Procedure to Use Xbox 360 Guitar Hero Controller on PC

We can use it in two ways. Let us know what are those two methods the first one is wired and the second one is wireless. Below we have told the details:-

Method 1: Use Your Xbox 360 Guitar Hero Controller to PC (Wired)

First of all, here we will tell you the details of connecting your wired Xbox 360 guitars to your PC. Sincerely, achieving this is quite simple. because a USB cable is included with the Guitar Hero Xbox 360 controller. This implies that you may just insert the USB cable into the PC’s USB port.

If you understand this easily, it is that you plug the USB cable of your controller with the USB port of your PC.

The drivers will be installed by Windows automatically, and the controller will be functional in a short while. You can begin using it to play the Guitar Hero games as soon as it is prepared.

Read:- How do you permanently delete PS4 messages?

Method 2: Use Your PS2 Guitar Hero Controller to PC (Wired)

This is the second method but it also comes in the wired method it is for the PS2 guitar hero controller, in that if you have a PS2 guitar controller then you will have to process it differently. But remember that here we are talking about PS2 Guitar Hero Controller.

Now, the USB cord is not included with such controllers. Therefore, you cannot directly connect those controllers to your PC’s USB port.

To complete this process you need to buy a USB adapter from PS2. Through this, you will be able to connect the PS2 controller to P2 USB, and after that just connect the adapter to the USB port of your PC. So that’s it. Instantaneously, your computer will recognize the PS2 Guitar Hero controller. You can now begin using it.

Read:- How To Create a PlayStation Network Account With Easy Steps?

Method 3: Use Your PS2 or Xbox 360 Guitar Hero Controller on your PC (Wireless)

This section will cover connecting a wireless Xbox 360 Guitar Hero controller to your computer. It is actually not that difficult.

The wireless USB dongle may occasionally be identified by the computer automatically. But occasionally you might have to manually install the driver. The driver to install should be included on a CD that comes with the wireless dongle.

We now anticipate that after reading the article, you are aware of how to use Xbox 360 Guitar Hero Controller on PC. But in case you need any help regarding them, then comment to us, and also comment if you have found your solutions.

How To Connect Your Xbox 360 Controller to Android Without OTG Cable?

How To Get Zoom Meeting on Xbox/Xbox one? Complete Guide

How to Reset the Password on Xbox one? Simple Process